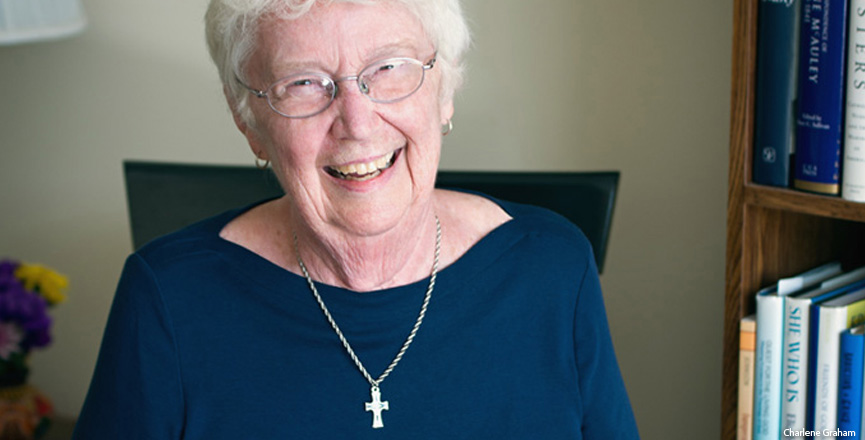 On the night before Sister Amy Hoey, R.S.M., became a postulant back in 1952, she ate a big lobster dinner, worrying that once she entered the Sisters of Mercy she wouldn’t eat lobster again. Now, more than 60 years later, she says she shouldn’t have worried. “It was a big shift in my life, but I felt I was at home. Thanks be to God, that’s where I continue to be,” she says. “And I’ve had lobster since then.”

Sister Amy, at 84, lives her faith with a lot of compassion and laughter. And chocolate, she’ll tell you. She is a joyful, driven member of the Sisters of Mercy order, a religious community founded in Ireland in 1827 by Catherine McAuley to serve the poor, sick, and uneducated. Mercy nuns are dedicated to social and political justice, especially focusing on the needs of women and children, healthcare, and the environment.

Religious sisters made a lasting impression on Sister Amy when she was growing up in East Boston. “It was a Catholic world,” she remembers. “I loved the sisters I had as teachers. They were first rate. I love that they prayed together and that they laughed together.”

As a Mercy sister in Manchester, Sister Amy continues the work that her order’s founder began in the streets of Dublin so long ago. She is an advocate for the aging, and keeps a close eye on current events, a hallmark of her order. “It’s a wonder what we can do together,” she says. “All change is local. And we’re serious about changing the world. I’d like to do more, but the current challenge is accepting the diminishment of aging in myself and others, and realizing that it’s all a part of life.”

Sister Amy’s consecrated life began somewhat pragmatically after graduating from Boston’s Emmanuel College in 1951. “There were not as many opportunities for a woman back then,” she says. “But also I was being called to a life of prayer, of getting to know God, and to serve people. Mercy is a relationship, with God and others. It’s the sense of God’s presence and God’s care that I love.”

Teaching seemed the best way for the young sister to serve, and she found her passion in the children she taught. “I loved it! Teaching was my life,” she recalls. She eventually became dean and president at Mount Saint Mary College in Hooksett and then joined the English faculty at Saint Anselm College in Manchester.Teaching gave way to another passion for Sister Amy in the 1980s and 90s: leadership. In 1980, Sister Amy was elected to be Reverend Mother of the Sisters of Mercy in New Hampshire, and then served the wider Mercy community in Rochester, New York, and Washington, D.C., until 1995. At that time, she became project coordinator at the U.S. Conference of Catholic Bishops, working on the guide for lay ministry: Co-workers in the Vineyard of the Lord. She is currently the Mercy family liaison for sisters who live at Warde Health Center in Windham, New Hampshire, fostering her interest in aging and the transition through life to death.

“I think one metaphor for Sisters of Mercy is a field of energy. It’s a gift,” she says with a smile. “And as Jesus says in Matthew’s gospel, what you have received as a gift, give as a gift. We receive God’s mercy, and we share God’s mercy. And as Catherine McAuley urged her novices, we dance every evening.”

To find out more about the Sisters of Mercy, visit www.mercyne.org or email nhsistersofmercy@comcast.net.