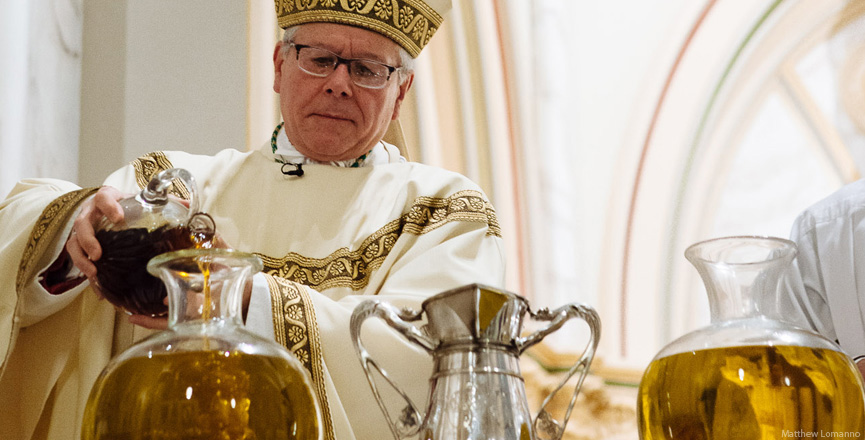 At the Chrism Mass -- which is usually the largest annual gathering of clergy and faithful most dioceses have -- the priests renew the promises they made at their ordination. The Mass takes its name from the most eminent of the three holy oils which the bishop commissions for his local church's use over the following year.

While the Oil of the Sick, used for those who seek the anointing, and the Oil of the Catechumens, which is imposed on those preparing for baptism, are simply "blessed," the Sacred Chrism is "consecrated," and all the priests present participate in the latter moment by extending their hands toward the vessel containing it as the bishop says the prayer of consecration.

The Chrism is used at the ordination of priests and bishops, baptisms, confirmations, the consecration of altars and the blessing of churches, where the walls are smeared with it in the shape of the sign of the cross.

As part of the consecration of the Chrism, balsam is poured into the oil, which gives it a sweet smell intended to remind those who encounter it of the "odor of sanctity" to which those people and things who are marked with it, and by extension all of us, are called to strive for.

Director of the Office for Worship and Vicar General