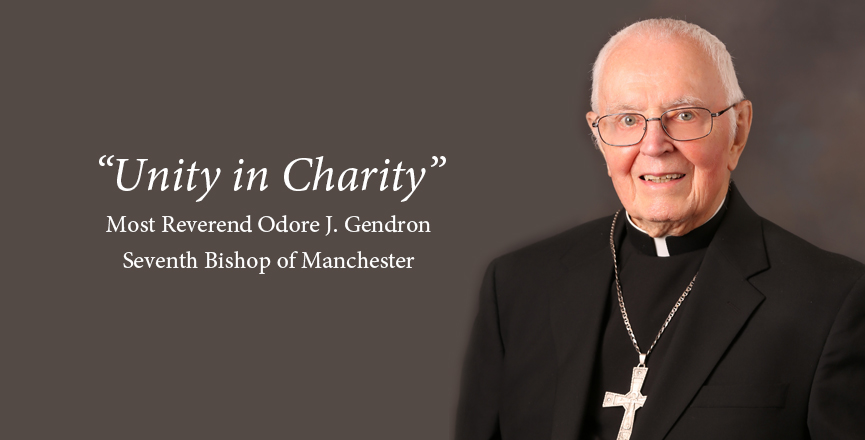 Home » About » Who We Are » Leadership » Bishop Odore Gendron

On October 16, 2020, Bishop Emeritus Odore J. Gendron, Seventh Bishop of Manchester, was called to his rest and to the glory of the Resurrection promised by the Lord after having received the prayerful support and consolation of the Sacraments. At 99 years old, and having just entered his 100th year last month, Bishop Gendron was the oldest bishop in the United States. Bishop Gendron had been receiving supporting care at Mount Carmel Rehabilitation and Nursing Center for several years.

Odore J. Gendron was born on September 13, 1921 in Manchester, New Hampshire and was ordained a priest on May 31, 1947 by the Most Reverend Matthew F. Brady, D.D., Fifth Bishop of Manchester, at Saint Joseph Cathedral in Manchester. Father Gendron studied at Saint Charles College, Sherbrooke, PQ, Canada and completed his ecclesiastical studies at Saint Paul’s Seminary in Ottawa, PQ, Canada.

In April 1965, Bishop Ernest J. Primeau, D.D., S.T.D. appointed Father Gendron as pastor of Our Lady of Lourdes Parish in Pittsfield. In 1966, he became Diocesan Vicar for Religious for the French-Speaking Communities of Women. In September 1967, Bishop Primeau appointed Father Gendron pastor of Saint Augustin Parish in Manchester where he served until February 1971 when he resigned the pastorate to become Diocesan Vicar for Religious full time. On December 22, 1970, Pope Paul VI named Father Gendron a Prelate of Honor with the title of Reverend Monsignor. In April 1972 he was named the first Episcopal Vicar for Religious in the Diocese of Manchester. In January 1974 he became the first Episcopal Vicar for Clergy in the Diocese of Manchester. On December 12, 1974 he was appointed by Pope Paul VI as Bishop for the Diocese of Manchester. The Episcopal Ordination and Installation as Bishop took place on February 3, 1975.

Prior to his ordination as Bishop of Manchester, Bishop Gendron also served as Notary to the Diocesan Marriage Tribunal; Chairman of the Diocesan Personnel Board; founding member of the Pastoral Commission; Chaplain, Court of Our Lady of Lourdes of the Catholic Daughters of the Americas, Pittsfield; Diocesan Consultor; President, Diocesan Senate of Priests; ex officio Chairman of Diocesan Personnel Board; received the “Granite” Award from the Knights of Columbus; and received the “Defender of the Innocent” Award from the N.E. Christian Conference, Hampton. Bishop Gendron retired from ministry as bishop on June 12, 1990.

On Wednesday, October 21, 2020 at noon, the Rite of Reception of the Body will take place at Saint Joseph Cathedral in Manchester. Bishop Gendron will lie in repose in the cathedral until 6:00 p.m., concluding with the Mass of Jesus Christ, High Priest. On Thursday, October 22, 2020, Bishop Gendron will lie in repose from 8:00 a.m. till 9:45 a.m. The Most Reverend Peter A. Libasci, Bishop of Manchester, will preside at a Mass of Christian Burial at Saint Joseph Cathedral, Manchester on October 22, 2020 at 10:00 a.m. The Rite of Committal will be celebrated after the Mass at The Cathedral Bishops’ Cemetery in Manchester, New Hampshire.

Due to current circumstances, attendance at the Funeral Mass will be limited to clergy, family, religious, and those closest to Bishop Gendron. The faithful are welcome to pay their respects and attend the Wednesday evening Mass following COVID precautions. All funeral services will be available via livestream at www.stjosephcathedralnh.org.